To provide the community with an alternative manner of solving community-based problems by encouraging the interaction and cooperation of the Police Department and citizens.

“By working together, we will strive to recognize, identify, and solve problems, thereby by improving the ‘quality of life’ for our community” 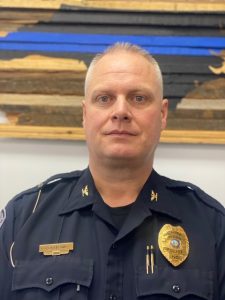 Chief Forehand has been with the Ayden Police Department since 1993. He is originally from Edenton, NC, and moved to Pitt County in 1989 where he attended college at Pitt Community College and earned his Associate Degree in Criminal Justice. He started his law enforcement career in Ayden as a Reserve Officer, and part-time dispatcher, and has moved up the ranks to Captain, and now Chief.  He enjoys playing golf, fishing, hunting and spending time with his family in his time off.

Captain Dempsey started working with the Town of Ayden in 2003 as a Police Officer. Captain Dempsey is from Pitt County, and he attended Pitt Community College where he obtained an Associates Degree in Criminal Justice. Captain Dempsey has served the Department as a Sergeant and Patrol Lieutenant.  Captain Dempsey is married and has two daughters. He enjoys playing golf and watching college football during his time off.

The Council meets on the fourth Tuesday of each month at the Ayden Community Building, 548 Second Street, at 6:00 pm. All citizens and business owners are welcome to attend and work with the Ayden Police Officers to identify opportunities for a safer community. For more information about the Ayden Community Policing Council, please call (252) 481-5834.

Submit a Tip to the Police Department

Choose a link below to download the Ayden Police Department app from your app store. This app allows citizens to submit anonymous tips from their mobile device.

The following are programs that the Ayden Police Department offers to the community and have been a successful component to providing a safe environment for all of Ayden.

These forms can be downloaded and filled out and returned to the Ayden Police Department.